New Dates for the “In Colors” Tour Just Announced 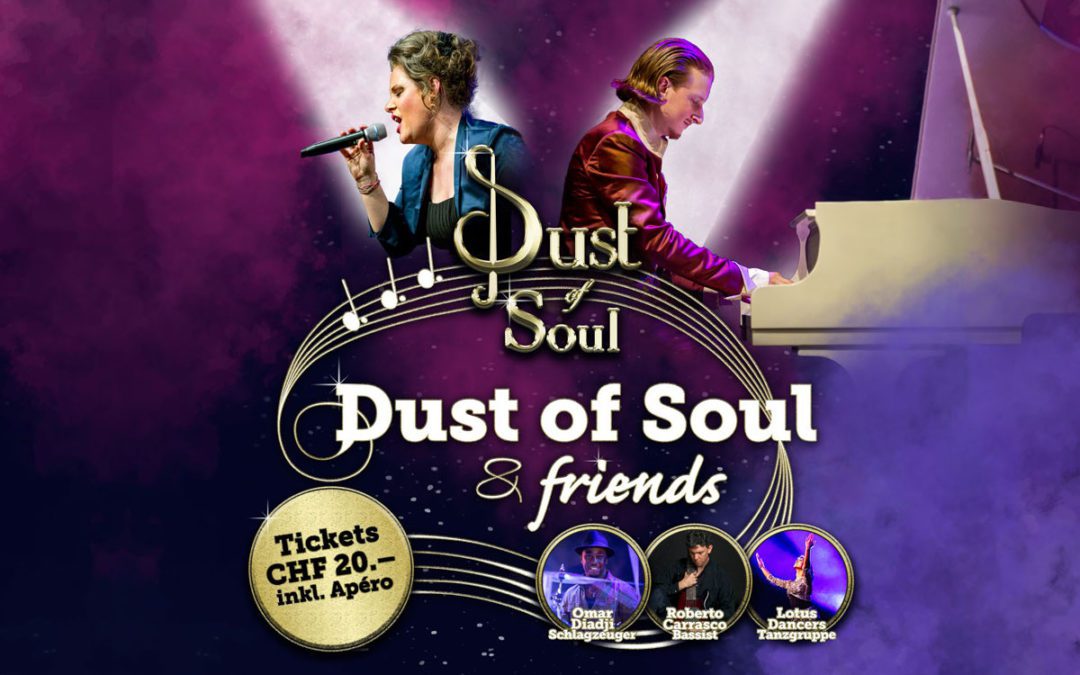 The “In Colors” tour 2019 was a huge success, ending the year in a Top 10 result at the National Finals of an European Contest and compliments from the Berklee College of Music and Sony Music. Now the tour continues… with new dates and an epic start: A New Year’s Concert in the exquisite Panorama Hall at Hotel Seeburg in Lucerne. On stage: Dust of Soul & Friends.

Dust of Soul released their debut album on 24 March 2019 to the public with a release show full of surprises: Only to participate in the show, twelve Indian dancers flew from Oman to Switzerland. Oman daily newspaper’s reporter Anirban Ray from “Muscat Daily” published an article about this happening. Never before such an intercultural event happened. Apart from the Indian guests, artists from South America, Africa, and Europe participated in the show: Columbian Percussionist & Singer Rodry-Go, Ghanaian Rapper Yaw Boso, Swiss Ballet dancer Alexandra Hunziker, and Swiss Breakdancer Marc ‘Addicted’ Spring. The album was fully celebrated and debuted in grace for Dust of Soul.

Dust of Soul bring new fusions that refresh, surprise, and inspire, so the feedback from the “In Colors” tour 2019. Also their unique genre – ‘Opera Pop’ – tells a lot about their openness, modernity, and creativity. All songs are Dust of Soul originals. All are written with a meaningful message to help people pursue their dreams and find new strength and bravery in life to do what they want to do.

Music has the power to change lives. That is not only what Singer Dusty and Pianist MiKey experience in concerts, but also in their humanitarian projects they initiate around the world. With their campaign ‘Humanity First’ in mind, Dust of Soul tries to connect, collaborate, and create together with local artists.

Dust of Soul is known for its fusions all around the world. After their 2018 fusion with an Indian school in Oman, they just launched their ‘Opera Pop’ fusion with Hindi rap & beat-boxing in October 2019. They filmed the music video in the Dharavi of Mumbai. Dharavi is a locality in Mumbai, Maharashtra, India, considered to be one of the world’s largest slums. Dust of Soul came across this fascinating project on Instagram: “The Dharavi Dream Project”. Highly talented kids from the Dharavi participate in this school to work on their skills, be it rapping, beat-boxing, break-dancing or bboying, or being a Graffiti artist. Where the talent is, there is also the will.

Dolly Rateshwar, co-founder of the movement, organised a casting with the kids for Dust of Soul to select the rapper for their featuring. Amongst Mc Heam, Dust of Soul met very talented young artists, such as ‘Mc Siddu’. They decided to work with him. Two months later, Dust of Soul are overwhelmed by the success: more than half a million views the video has generated so far on YouTube and Facebook – and for Switzerland being a rather small country (with a population of around seven million people) this makes it a huge success.

To celebrate this success with the kids from the Dharavi, Dust of Soul will travel again to their school to meet them and overhand a donation in the name of the Humanity First Organization. For Dust of Soul it meant everything that the kids participated in their new music video Victory.

To build a career with friendships is the most beautiful way there is. Dust of Soul are proud of their friends and deeply thankful for their support throughout their music journey. On stage they are always with friends. That is why they announce a New Year’s Concert with Friends: Senegalese Drummer Omar Diadji, Spanish Bassist Roberto Carrasco, and Indian dancer from Bollywood Lotus Dancers will be on stage with Dust of Soul on the 2nd of February 2020.

This year’s New Year Concert will be held as part of the new dates announcement of the “In Colors” tour at the exquisite Panoramasaal at Hotel Seeburg in Lucerne. The concerts starts at 3:00 PM with the doors opening half an hour before. At the end Dust of Soul offers to clink glasses with their audience as a symbol of gratitude and friendship. You are all welcome.

When everything is going normally it is easy to be there for each other. But what if the extraordinary situation is proclaimed?

We also cannot give concerts. But we can make music and give you comfort in this way. With our song for Switzerland we say THANK YOU - GRAZIE - MERCI - THANK YOU to ALL Don't give up - together we go this way.

After every low there is a high. Together we are stronger.
Incredible what many are doing to help us from neighbors to health care or friends.